Corrèze has some of the Most Beautiful Villages in France on its territory, but also breathtaking natural, heritage or cultural sites. Give them the time they deserve and they will reward your curiosity.

Nestling on the banks of the Dordogne, Argentat sur Dordogne was for centuries a great trading port. From the Quai Lestourgie set out the gabares (= traditional transport ships) loaded with wood, leather and oil. You will enjoy strolling along the old-fashioned cobbled quays to admire the fishermen’s houses with their slate roofs, the noble facades and their turrets. The rue Sainte-Claire has a few beautiful residences, such as the Hôtel de Turenne. 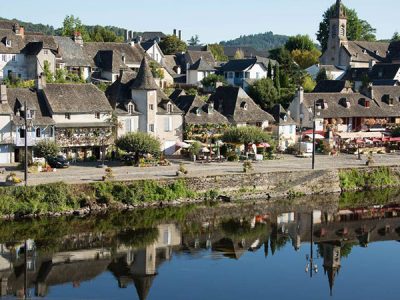 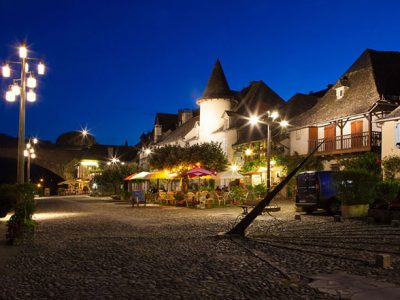 A medieval town built on the right bank of the Dordogne, Beaulieu was nicknamed “the Limousin Riviera” thanks to the mildness of its climate, which is favourable to strawberry growing. People come here first for its remarkable Saint-Pierre abbey church, whose portal, a masterpiece of Romanesque art representing the return of Christ at the end of time, can be compared to that of Moissac. One strolls happily through the alleys, one compares the facades topped with turrets, decorated with medallions and cherubs, like the house of Adam and Eve, one dreams in front of the Chapelle des Pénitents and its bell-tower-wall which is reflected in the waters of the Dordogne. Nearby, one can embark on a gabare from May to October, to relive the epic story of the gabariers who used to go down to Libourne to deliver their loads of wood for the Bordeaux barrel makers. 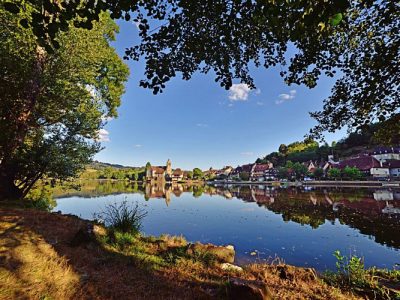 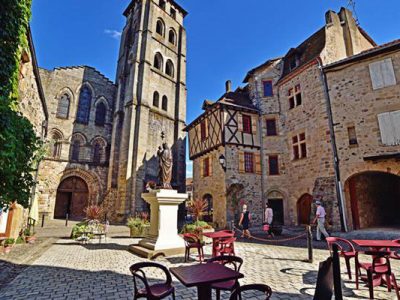 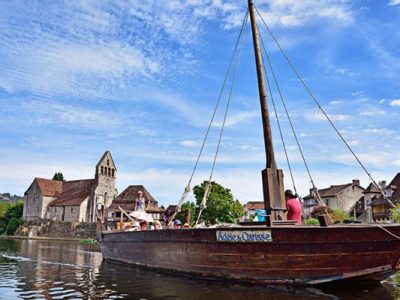 If it is called “Gaillard”, it is probably for two reasons: coquettish and valiant, it was also a fortified city in the Middle Ages, when Gaillard meant “fortified”. A welcoming, sunny town, it is adorned with a very rich historical centre, an astonishing “lighthouse-water tower” and a magnificent palette of flowery gardens. Brive-la-Gaillarde knows how to cultivate the art of good living with its book fair, its rugby team and its fairs. 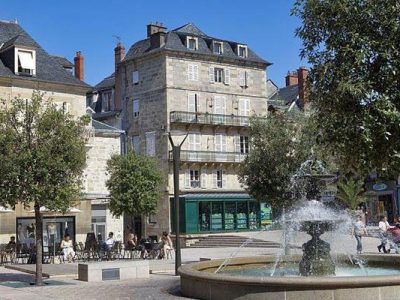 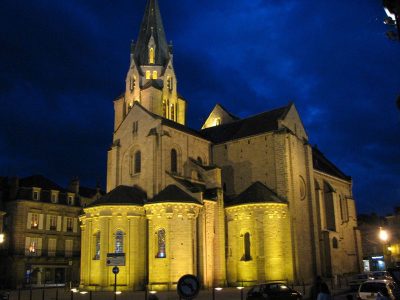 Collonges-la-Rouge offers an original and unusual show, as much by the flamboyance of its stones as by the richness of its heritage. Red sandstone with ochre shades, grey slate, blue slate, blue stone, green vines hanging on the walls, form the palette of a small dream city.

You will discover the church built in the 11th century and fortified during the wars of religion in the 16th century and the chapel of the penitents built in the 13th century. If you continue your walk, you’ll come across; the castle of Vassinhac, built in 1583, both refined and powerful, flanked by beautiful hexagonal towers with spiral staircases, the hall where you will find the old oven where the villagers used to bake their bread, the house of the Siren which now houses a museum of art and architecture and the house of the Mermaid, which is a museum of the art and culture of the region. 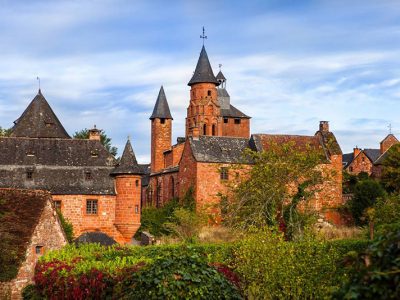 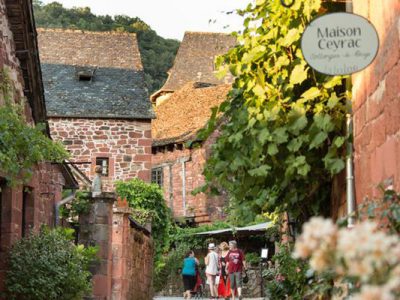 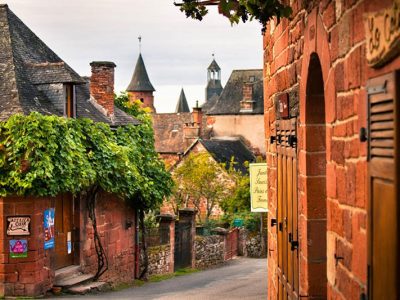 One of the most beautiful natural sites in Corrèze located 12 km north-west of Tulle. The waterfalls are made up of three successive falls of the Montane river with a total height of 143 meters: the Great Jump of 45m, the Redole of 38m and the Ponytail of 60m. The latter plunges into the ” abyss of the inferno ”. Abel Hugo, the brother of Victor Hugo, first described these waterfalls in a work entitled ” la France picturesque ” (1883). 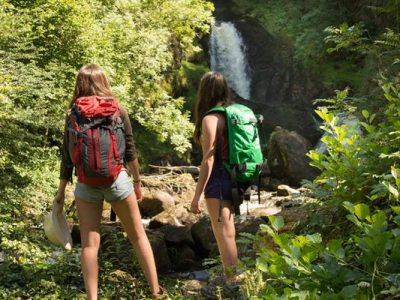 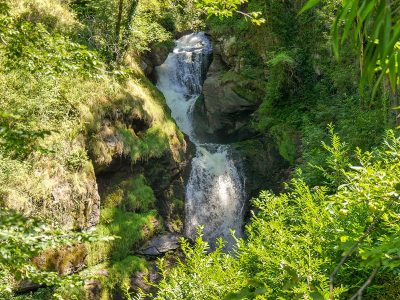 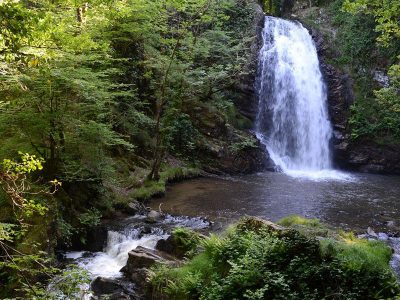 The Castle of Val

Built in the 15th century, Val has become almost insular since the creation of the dam. Its exceptional setting makes it one of the most famous sites in the region.

The fortress is flanked by six towers crowned with machicolation and topped with pepperpot roofs. In the main courtyard, a Gothic chapel, also from the 15th century, is dedicated to Saint Blaise. One enters the castle by a staircase that leads to an iron-clad gate whose tympanum is decorated with a bas-relief with the fleur-de-lys arms of the d’Estaing family.

Every Monday evening in summer; come and discover this place differently with dramatised visits (on reservation). For children: treasure hunt in the castle to make the visit more fun. 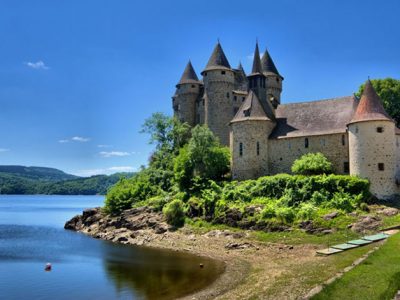 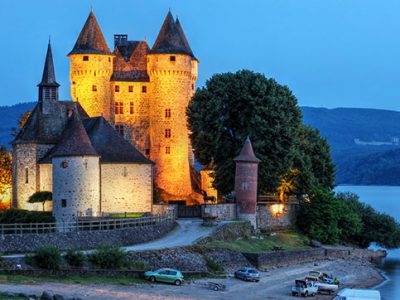 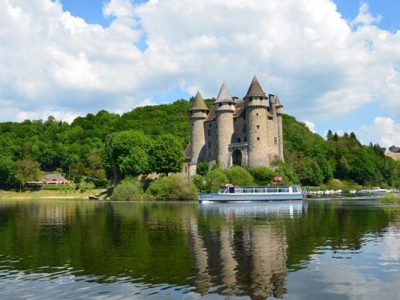 The Chirac Museum in Sarran

It presents the gifts received by the President of the Republic in the exercise of his duties since 1995. As a museum of contemporary history, it offers a view of the world today thanks to the permanent exhibition presenting a selection of gifts (150 objects). These gifts are divided by geopolitical zones and situated in their context: state visits, international summits, private visits. The very beautiful 600 m² room is reserved for temporary exhibitions, the visitable reserve offers visitors free access to 1300 objects.

Unique in Europe, the site of Les Pans de Travassac offers an original journey in the slate tradition. Discover the world of the slate quarrymen who, since the 17th century, have been working stone in this exceptional setting. In addition to the steep cliffs where mineral and plant life blend harmoniously, the spectacle is everywhere.

You will not fail to observe the work of the slate through the ancestral gestures of « rebillage, cleavage and cutting ». Thus, by the hand of man, a stone becomes a slate. In the heart of a gallery, a museum awaits you, with numerous documents, tools and films, retracing the history and life of the slate quarrymen of Travassac through the centuries. Shop with sale of slate or Corréziens products. 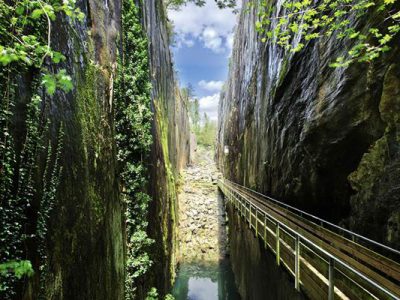 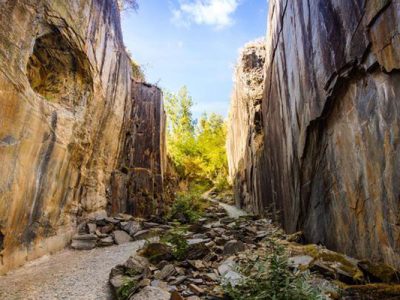 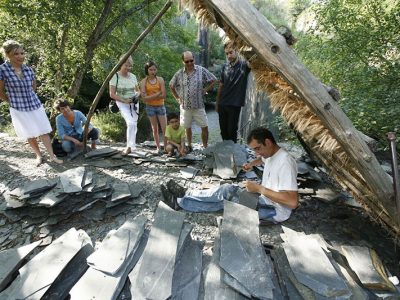 The village and its old noble houses dominated by the imposing remains of the castle form a picturesque ensemble that has made it one of the most beautiful villages in France. Nestled in a loop of the Auvézère and protected by a rocky spur, Ségur is, as the toponymy indicates, a ‘safe place’. As early as the 9th century, the construction of a castle gave it its vocation as a stronghold. The construction of two bridges, in the 13th century, allows the extension of the town on the other bank upstream and downstream of the great loop. Until 1750, Ségur was the seat of a Court of calls which received the calls of 361 seigneurial courts. Its architectural richness owes much to the many « robins » (« people of dress » ; tailors) attracted by this court. 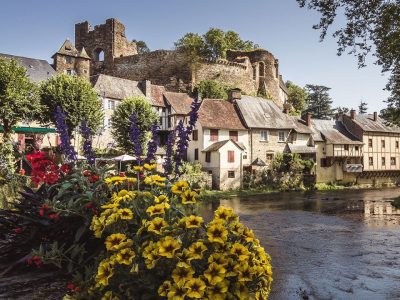 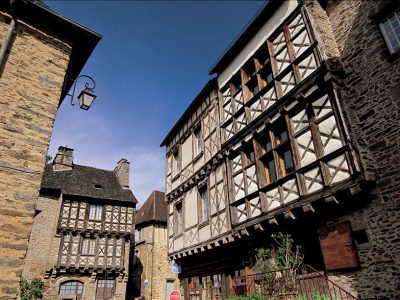 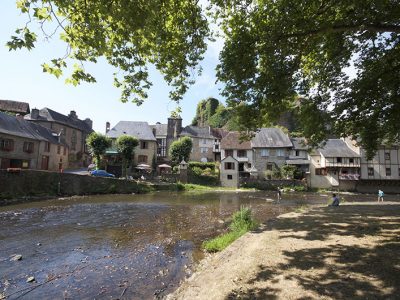 Turenne does not lack panache with the slender silhouette of its limestone steep rock, an avalanche of slate roofs and daring turrets. You will be amazed by the richness of the heritage: the church and its gilded wooden altarpiece, the 16th and 17th century private mansions, to be admired by following the signposted itinerary so that you don’t miss any of them.

And of course the castle, or rather its imposing ruins: the ramparts, the 13th century keep and the Caesar Tower. From the top, the panorama is unforgettable!

Did you know this? Turenne owes its opulence to its viscounty, a real state within the state: until the 18th century, Turenne minted its own money and raised its own troops, in short, defied the King of France. 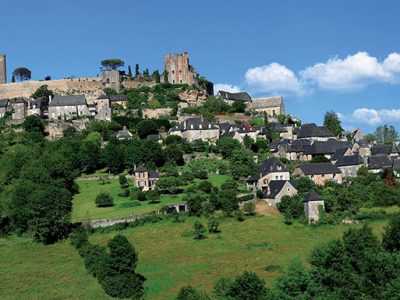 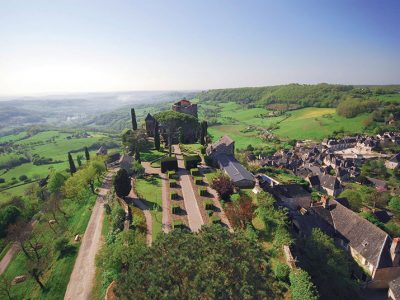 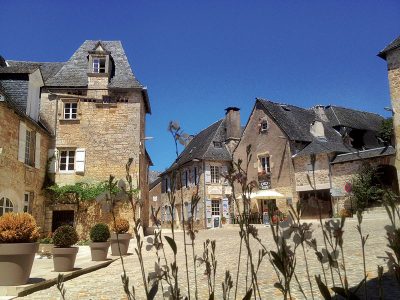 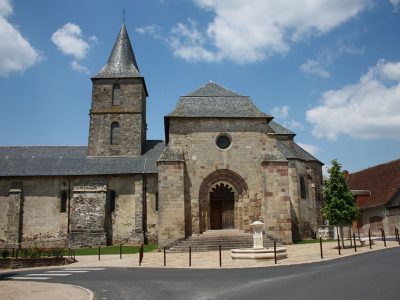 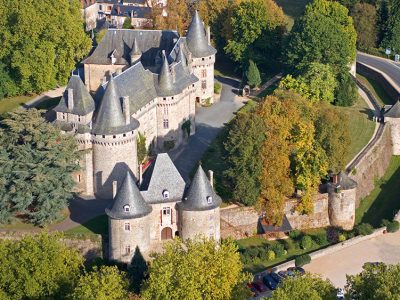 Discover the treasures of our territory 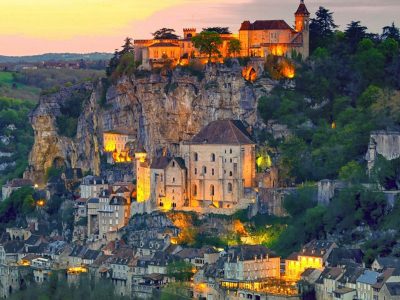 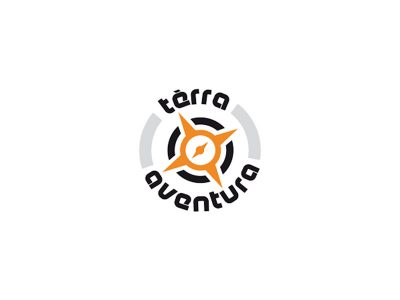 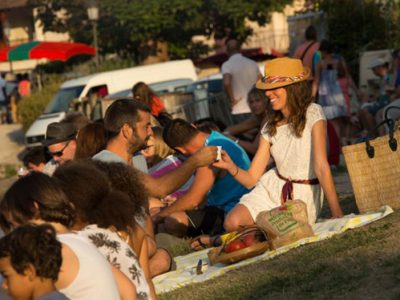